skip to main | skip to sidebar

This blog will comprise a collection of ephemera, mess and miscellaneous artifacts reflecting on the writer's life. 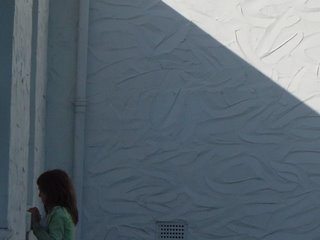 In order to get myself thinking for my AERA paper I am doing some reading.
Jackie suggested reading Guy's article called Electric Involvement: Identity performance in children's informal writing which you can find here.

What is useful about this is that he distinguishes between what he calls "anchored identity", and "transient identity" which is a way of distinguishing between two different positions, those:

which are profoundly influenced by a long history of socio-cultural practices (such as gender or religion) and those which are more easily make, remade and unmade (such as fandom).

This helps me make sense of my data.

My focus is on home/school crossings as instantiated within multimodal texts in the context of this project.

But I have to find a way of looking at identities which are more anchored in home spaces such as being the child of a builder, and therefore being interested in the plans of houses, or always going to the same campsite with a roller coaster every summer, and identities which are about more transient forms of play such as Scarecrow Tig, Barbie, Power Rangers.

These then are realised in children's multimodal texts.

I am also reading Jackie Marsh on third space.
She says that,

The concept of third space is not without its limitations. The worlds of educaitonal institutions and homes/communities cannot be seen as two entirely distinct and separate domains, there is seepage btween them. In addition, children's social and cultural worlds are constructed of numerous domains and discourses that overlap in complex ways.

She thinks that third space theory is very modernist and we should be more post modern, looking at children's text making as fluid, transitory, but anchored within these cultural specific identities as well as more ephememeral ones.

This makes sense, as I watched children both engage with specific cultural worlds (plans of their homes) alongside more transitory moments of playing a particular game (Scarecrow Tig) and then watched these sediment into text making.
Hide and Seek is very strong within my data.
Is this child hiding?
From what?
Posted by Kate at 10:37 AM

Gosh. I also read Guy's article when I was putting together the symposium abstract for BERA.

oh yes and I read Jackie's paper on 3rd space that she did in Australia. Is that the one you are reading?

I am not sure - she sent it to me but I am not sure what from
Ofcourse Jackie is the person who gave me all these brill ideas.

Kate
I am an academic interested in the New Literacy Studies, artifacts and narratives of migration. I am always on the move.